It seems that the unimpressive response for the last song ‘Kuttay Bhi Tum Say Achay Hain’ only motivated the veteran Faakhir into proving to his fans and the music industry that yes, he can indeed flourish and a mere negative response is definitely not worth disappointing him. Faakhir is back with a new song and music video titled ‘Kho Jaon’ and aims not only to showcase beauty in it but also appreciate it.

Directed by Lux Style Awards Winner Sohail Javed, the music video for the new song features nine lucky short-listed female models from Veet’s Miss Super Model competition and the leading actress from the Pakistani cinema, Meera. Released on the 16th of November 2012, the song is getting a well amount of deserved praise, much to the lease of Faakhir.

Performing for the last two decades, whether he is on the road with his former band mates Haroon and Asad from Awaz or if he is just hitting the road on his own, Faakhir has successfully established his place as a musician worth recognition in the country’s music industry and only success is inevitable of the 39-year old veteran.

You can take a listen and download: Faakhir’s Kho Jaon! 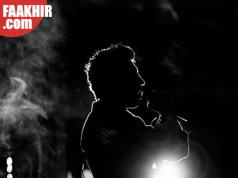