Sixth beat, fundamentally cave in the soft/pop & rock genre. The main Strength of our music is on lyrical gratifications. Keeping our music symphonic and catchy is our inaugural priority. Our quarry is not only to cover the youth but as well as rest of the aged majority.

Ali Arshad is an MBA graduate from university of central punjab andÂ  a Vocalist , he was performing from his childhood in school , college and even in university he was also teaching a student of F.S.C who loved to play guitar and he was also a good Rhythm guitarist named Tallal haider they both had performed lots of concerts.

One day in Alhamra Open theatre they found an impressive lead guitarist (shahrukh) and these three guys made a Band named Sixth Beat and on the Third Concert of Band Sixth Beat they were feeling that something is missing in their band so they have found another young boy named Raja Aniqui (MBA graduate) who was a good base guitarist and then these four guys rock the city Lahore with their talent and performed concerts almost with all famous singers of Pakistan they made about 9 songs with full of emotions and still working on making more songs and improving their performance quality. 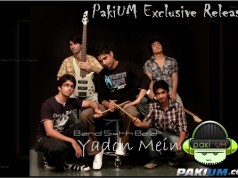