Saya E Khuda E Zuljalal made waves in the time of Waar two years back for having the biggest of stars come together for a grand mega budget project but it seems that time had just lost itself somewhere. From the superstar, Shaan Shahid quitting the film to rumours of Lollywood’s Diva, Resham playing one of the main leads; this patriotic film made headlines every now and then but managed to make people forget all about it right after things got clarified or out of the news. Out of this sudden curiosity that just arose inside me, I thought of having a conversation with the producer of this ‘not so’ shelved film, Doctor Pasha; asking him what the current state of this film is and he confidently clears all the misunderstandings.

“Well we have completed the shoot and the editing has also been done. We are currently working on special effects and sound. We’ll be set by the 26th of December but as the promotions haven’t begun, we’ll have to hopefully release it sometime in the beginning of next year” said Dr Saheb on the current post-production phase of the film. “We’ll finalise the distribution soon and start the promotions right after that towards the end of this year” he further commented.

Saya E Khuda E Zuljalal (Second Teaser)Pakistan Ko Tabah Karne Aye The? , Pehle Pakistani Se To Millo!Presenting the second Teaser-Trailer of “Saya E Khuda E Zuljalal”.Wait for the THEATRICAL TRAILER with its releasing date, COMING SOON.This film is about the story of Pakistan narrated by the Heroes of Pakistan, what Pakistan was suppose to be and what it is today.Starring: Javaid Sh, Moammar Rana, Arbaaz Kh, Afzal Kh, Asad Malik, Kamran Mujahid, Sohail Sameer, Shafqat Chema and many more

Saya E Khuda E Zuljalal would star Lollywood’s ultimates like Mommar Rana, Noor Bukhari, Nayyer Ejaz, Shafqat Cheema, Javed Sheikh, Afzal Khan aka Rambo, Arbaaz Khan and Jia Ali whereas it also features a whole bunch of brilliant artists from the television industry such as Asad Malik, Firdos Jamal, Sohail Sameer, Kamran Mujahed, Tanvir Malik, Nimra Khan, Aamir Qureshi. Not only that the film also introduces a couple of new faces like model turned actress, Rachel Gil, Salman Faisal, Essa Choudhry and Sasha Pasha! The story is set in three eras of a war, a scenario of a local story and the current circumstances of the country. It promises to awaken the inner patriot in oneself and will surely turn out as a turning point for Pakistani cinema considering the high budget and visual treats that will surely be beyond amazing. 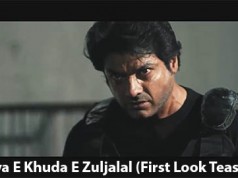