For years, Music has been Pakistan’s biggest Passion point. Pakistan has given birth to so many musical prodigies. That was the time when music was all about conveying your feelings through an original lyrical content.

Recently Pakistan experienced a flood of song covers, from music shows to underground bands, all have been performing cover songs. The process of creative song making started vanishing by the huge influx of foreign music and thus no focus on making original content, which once defined our musical ability.

Walnut Sessions aim to become Pakistan’s Biggest Original Music Platform, a unique platform for the young and unsung individuals of Pakistan who have the talent but lack a platform to showcase their talent. It’s not your typical music show airing cover songs or a program that comes in episodes. Walnut Sessions, will be releasing 2 original music videos every weekend for the next 52 weeks!

Walnut Sessions empowered the artist by providing them with one of the finest house bands, top notch music composers, talented lyricists; giving 100% facility to the artist, all free of cost.

Some of the best session players like Kami Paul, Farhan Ali, Rufus Shahzad and Amir Ajmal have been selected to form the houseband, giving the performers an opportunity of a lifetime. Featuring artists include Rakae Jamil, Hamza Butt and Waqas Ali.

In the first quarter, Walnut Sessions will feature 18 original songs. To ensure maximum versatility, there will be five English songs and 13 Urdu songs ranging from a variety of genre. Ethnic musical arrangements have been used with instruments like sitar, rainmakers, duff, morphiz, harmonium, accordion and congas.

Walnut Studios has always aimed to play a vital role in stimulating the music industry of Pakistan without relying on syndicated content and inspire young blood to discover and showcase their talent to the world. Core team of walnut Sessions include Anam Sajid as the Content Head, Hassan Omer as the Music Producer & Adnan Butt as the Executive Producer.

Walnut Sessions is definitely something to look out for!

Take a look on its first promo: 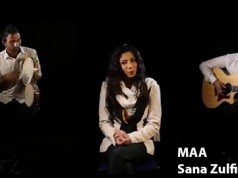