At the time when pakistani channels are loaded with foreign content and  broadcasting foreign dubbed dramas on screens, Hum TV‘s hit serial Humsafar has brought an achievement for Pakistani drama industry. Pakistan’s record breaking drama serial “Humsafar” is going to be aired on Indian channel Rishtey TV. It has become a delightful news for Pakistanis.

Hum TV yet stands alone to that prime position to sell Pakistani drama rights to Indian television. Rishtey TV  aired the first episode of Humsafar back on saturday. We have seen critics, showbiz personalities, anchors along with general public arguing to stop airing the foreign content on the Pakistani channels, and to promote Pakistan‘s own Showbiz indsutry. However, it seems that Pakistani Showbiz is now going to set a new trend to push their stuff in Indian community.

Humsafar drama was aired from September 2011 to March 2012, and was directed by Sarmad Sultan Khoosat. The drama was based on a novel “Humsafar” which was written by Farhat Ishtiaq. The serial captured a wide number of viewers to its channel, and airing on Indian channel is yet another record for this hit drama serial as it has become the first drama serial that would go on-air in India. 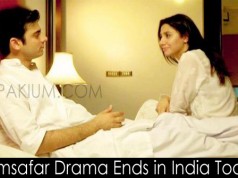