Apart from Turkish soap operas, ‘Bulbulay’ is the hottest thing among the country’s television programs. Nabeel, Momo, Mehmood Sahab and Khoobsoorat became household names ever since the shows inception and due to the immense increase in the popularity, the show became the highest rated comedy show in Pakistan as of date. However, the fans might be disappointed to find out that Ayesha Omar, who plays the stunning Khoobsoorat in the show, has decided to call it a day as far as ‘Bulbulay’ is concerned.

“Enough for Bulbulay,” says the lovely Ayesha Omar after taking the decision of focusing solely on her music career. Currently starring in ‘Zindagi Gulzar Hai’, the model-turned-actress achieved incredible heights when she hit the television screens in different drama serials but has decided to follow a different path for her career.

Feeling that she is not being reached with the right roles in the country’s film industry, Ayesha Omar has made it clear that Lollywood is not an option for her and believes that singing is the right direction for her. “Fans will have something different very soon and hope they will like me as a singer”, further states Ayesha Omar. 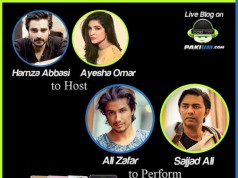