One of the promising Pakistani Bands – Aunty Disco Project – which got disbanded last year,  has now released today another track that couldn’t see the the light of the day. While the band is still broken, as the band members are disperse here and there, they thought to share today a single track that couldn’t be released when the band was LIVE and ALIVE.

So here we have today another song of Aunty Disco Project Jaagay Zameen. After listening to it, one must think that this Pakistani Band should not have broken. 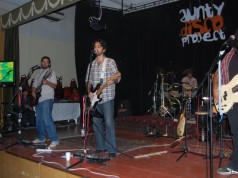 Aunty Disco Project â€“ the most talked about band these days