Since many music artists such as Atif Aslam, Jal and Roxen, came into the limelight in recent years, our youth got inspired by them more than anything. Starting from how they dress up to how they talk, our Youth is copying that sort too vigorously and the only thing, they see in them is – GUITARS.

Well, if we talk about Youth, they just need an entry to be followed and same happened with this trend, which I would like to term as “Guitar Trend”. In Karachi or Lahore, if I particularly talk about, music was always loved, and was appreciated, but this trend is generally ruining the real taste and flavour of music. We all know that we have that sort of people around us, who at least have one Guitar, and they know they cannot play it, they even know they don’t want to learn that,  and they also know that  they cannot pursue it, but still – they have one. WHY? There are many basic points which I personally think, compels them to get a guitar. The reasons are as follows:

They generally buy guitars just to pretend, and to act that they are different. You see, an act of being cool or should I say K3wL. Well, nobody becomes Buckethead or Slash by just investing ten thousand or more on a guitar, you have to give it time and determination, for music, you should be passionate.

2- To impress and Attract Girls:

They buy guitars to attract girls, and to have display pictures, which  according to them are TRENDY and FASHIONABLE and girls would die for them. Well, it’s not the case. You cannot hunt girls, by just carrying a guitar and posting your pictures with them on Facebook, Twitter or Myspace.

3- To pose as some one different from others:

To differentiate themselves from one another. Our youth loves being termed as “Musician” and “composer” so yes, I personally think, they have this thing in mind that if they own a guitar, people would love them, and would call them a Musician, or a Music producer.

4- Confused as to where to spend their money:

They’re confused, and wrecked. Seriously yes, they don’t even know why and what they’re buying. They don’t know which scales should be used, which company/brand is better, they JUST HAVE TO GET IT.

5- To experience that “Celebrity Feeling”:

To get popularity, and fame among the circle they socialize, or that school/college/university they are in. Youth always loves fame/ and that “CELEBRITY Feeling” thing.

To sum up, I just have a request for all these sort of cool boys around us, that if they’re concerned about music, they should be passionate. Salman Ahmed, Faraz Anwer, Slash, Buckethead, Kurt Cobain, they never made any accounts, posting pictures of them carrying a guitar. Music is a built-in product in your mind. And if you really want to be a musician, you have to devote your entire life to it because, music does not depend upon guitars ONLY because it has a completely different definition to it. People only will criticize you if you have a guitar, until and unless, you don’t consider music as your top priority. If you love music, GO for it, search for it and study it. Make it your degree and your life, but if you don’t want to do it seriously, for the sake of those reasons which I mentioned, please don’t ruin the essence of melodies and music.

P.S:  Having a guitar DOES NOT make you a Musician. 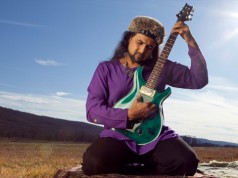