Farhad Humayun – singer, drummer extraordinaire and founder of the band Overload, released his first solo English single “Give in”.  Penned by the artist himself, the song reflects on Farhad’s emotional journey throughout his life thus far. It is a story of gratitude, fear, acceptance, of dreams that may or may not come true and finally a story of love. The musical arrangement complements the vocal with its solemn yet powerful music.

Directed and produced by Farhad Humayun himself, each frame of the video is treated like a painting which reflects his training and background in Fine Arts and is an eclectic mix of imagery highlighting the reality of the world from his eyes – The pain, the hopes and the power of dreams. The subtle nuances in the video take the viewer from one end of the emotional spectrum to another. The video hopes that people across the world will transcend boundaries created by governments, religion, ethnicity, race, language, tradition and limitations people set on themselves, to reach the higher spiritual ground.

On releasing the single, singer, songwriter & drummer Farhad Humayun said,
“There are so many different styles of music I want to play & I like to step out of my comfort zone to explore myself further. When I’m not commissioned to make music for a purpose, I like to write and record what I feel like saying and true accounts always resonate with people. This is a song that seemed to write itself and it chose the English language. It has multiple layers of audio and video which is why it can be experienced over and over again and people can discover new meanings. I want to work with the best instrumentalists and recording professionals in the world and I’ve taken that first step by working with Richard for mixing and Abbey Road for Mastering”

Richard Hilton, who mixed the song, has worked with musical legends such as David Bowie, Eric Clapton, Bob Dylan, Elton John, & Duran Duran, said “Farhad has a great voice. Farhad has the ability to tell a great story without getting lost in vocal acrobatics that singers nowadays seem to be concerned with. I think we have the possibility to do something really important here and I don’t feel that way about many music opportunities. The possibility of reaching across cultures, across religions, across stereotypes and creating something that people care about. This opportunity doesn’t come along every day and I am humbled by the opportunity and hope we can rise to meet the challenge successfully.”
Messages of praise have poured in from across the globe, and from some of the most acclaimed musicians, including legendary Bassist Leland Sklar of Toto & Phil Collins, Adrian Vandenberg, former guitarist of Whitesnake.

All instruments on the song are played by Farhad Humayun and additionally features Manchester legend, Aziz Ibrahim on guitar, Afaq Ahmed on Bass & Sheraz Siddiq on Keys.  Farhad Humayun will continue to tour the world with Overload but has taken some time out to write and record solo music in various languages including Urdu, Punjabi and English. The next single ‘Jindri Lutti’ comes out on Eid. 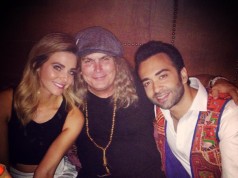 Farhad Humayun Sings His Heart Out in Hollywood