Karachi; 24th January 2016: Fog Catcher Films, a sister concern of Stimulus Productions, has announced what can be tipped to be the next blockbuster of the Pakistani cinema industry, Albela Rahi – a film on the epic tale of once an ordinary man, Alamgir, who rose to be the iconic Pop star of Pakistan and the one who pioneered the pop music genre in Pakistan.

It has been revealed that the lead actor playing the legendary pop singer is none other than Fawad Khan, Pakistan’s leading heartthrob and superstar. The 34-year-old actor who has been a true sensation in the television and film industry of Pakistan and India is perfect for this role having been a seasoned musician himself. Fawad Khan made his cinematic debut in 2007 and has come a long way since then, making his Bollywood debut in Shashanka Ghosh’s Khoobsurat opposite Sonam Kapoor. According to an insider, although Fawad is very selective when it comes to signing a film, he fell in love with the script and the story of Albela Rahi and has been on-board since day one!

The plot revolves around Alamgir and his struggles, his journey from East to West Pakistan and how he brought a wave of pop music along with him. Alamgir with his vigorous style of singing and stage performance brought a fresh breath of air to the Pakistani music industry in the early 1970’s. He introduced Urdu pop music and became an instant hit with his song ‘Albela Rahi’.

With an original script, a legendary protagonist together with Fawad Khan as the male lead, ‘Albela Rahi’ – Fog Catcher’s debut film shows immense potential of being a huge critical and commercial success.

‘Fog Catcher Films’ is a sister company of Stimulus Productions, Pakistan’s leading TV commercials’ production house. Stimulus Productions has rose to top in short period of six years and has produced over 200 television ads for blue-chip brands in Pakistan, working with both local and foreign directors.

Below are some more exclusive photos from the event:

ALBELA RAHI KICK OFF CEREMONY
1 of 12 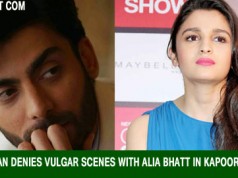