Earlier, we reported that Mawra Hocane has stepped out in Mumbai to read the scripts of two Bollywood movies she was offered by Indian producers. Since when she is in Mumbai, she is updating her fans through her Instagram. In a recent post, she has taken her fans by surprise when she posted a video of Bollwood actor Ranbir Kapoor – her only Bollywood crush – praising her and hoping to meet her soon.

In his video message, Bollywood celebrity Ranbir Kapoor blows a flying kiss and is seen saying, “Hi Mawra, this is Ranbir, here, you are extremely beautiful, extremely talented and I hope to see you sometime soon,”

Both sisters, Urwa and Mawra Hocane, started their acting career from drama serials and commercials. After the success of her debut movie Na Maloom Afraad, the elder sister, Urwa Hocane has already announced that she won’t be doing more drama serials and will only concentrate on her big screen career. Now, it seems that Marwa is going to follow Urwa’s footsteps.

Though Mawra has not disclosed the producers and film names but in an interview to weekly Urdu magazine, she had confirmed that she was offered to two Bollywood movies. She is currently in Mumbai to read the scripts of the movies offered to her.

PakiUM wishes Mawra a very good luck for her Bollywood debut and hopes that she makes it with her crush, Ranbir Kapoor. 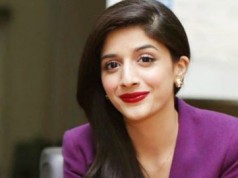 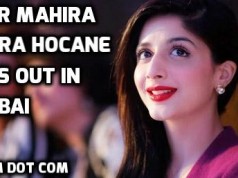 After Mahira, Mawra Hocane steps out in Mumbai