With this new undertaking, HSY endeavors to share a unique perspective on the nation’s favorite celebs in a format that no previous entertainment programme has offered thus far. With a vision of creating a show which refrains from the usual gossip, “Tonite with HSY” features discussions shaped around lighter topics such as entertainment, music, film, clothes and the celebrities’ views on life. The project promises to deliver engaging and fun filled content which is a welcome relief from the negativity that has dominated TV screens in the recent past.

The new show will also feature different segments; ‘Love Em Hate Em’, where the guests will be shown photographs of celebrities on which they will share their comments, ‘Ajnabi Kaun Ho Tum’ where guests receive anonymous phone calls from family, friends and colleagues for them to guess who it is and ’Takra’ a friendly Q&A war between guests, with a view of making the show more entertaining, candid and spontaneous.

Speaking about the show, Hassan Sheheryar Yasin said “There is a lot of despair in our country and TV in Pakistan is a constant reminder of all the wrong things happening in our part of the world. This new show is one way to get people to focus on the positive and take a break from all the negativity in our lives. The new show is based on an entirely new format; it’s literally like walking into my house and having a chat with me. The set is very creatively designed and looks just like my house; hence, it is an ideal place to have intimate conversations with yours truly.”

In his years of fashion, HSY’s pioneering role has been of significant influence, working to shape the course of the Pakistani fashion industry and to create new professional benchmarks through his fashion design, innovative fashion marketing and promotion, with this television venture, he campaigns to make a new benchmark and give talk shows in Pakistan a new meaning.

The new show will air every Saturday with repeat telecast every Sunday following the live airing.

Watch now the first promo of Tonite with HSY that shows the celebrities who will be coming on the show: 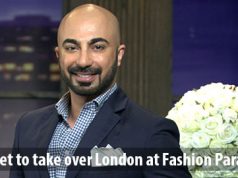 HSY set to take over London at Fashion Parade