The Jamshoro based Sufi-Rock Band, The Sketches, takes on board the music maestros Aamir Zaki, Gumby and Faraz Anwar for its upcoming second album.

The Sketches who has showed its commitment towards music and passion to revive their native language, is now all set to complete its 2nd Album. The second album, the name of which is still not finalized, will feature so many great musicians working along side The Sketches. As per our information, the recordings for The Sketches second album is in full swing and the band has the plan to make it as big as possible.

To make it big, the band has roped in the guitar maestro, Aamir Zaki, who is considered a big yet under rated name in Pakistan’s Music Industry. We have been told that Zaki will be doing at least two tracks with The Sketches. The tracks will be based on the poetry of Shah Latif Bhittai.

Other than this, The Sketches guys have also been hanging out with ace music producer and drummer Gumby, and two of the most Kick-ass Guitarists of Pakistan, Faraz Anwar and Nabeel Nihal Chishty. Reportedly, they have also played guitars in The Sketches new album.

This is not just done, as The Sketches confirm us that they have a lot more to reveal which they will only do once things proceed in the right direction.

We wish them best of luck and appreciate their consistency for producing and releasing stuff back to back in the industry, that does not pay back well. 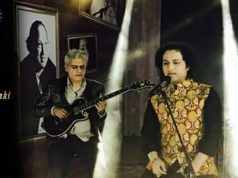