…and here is finally the most aniticipated music video and full official version of the already hit track Pee Jaun by Farhan Saeed . The video is shot and directed in India by Kenneth Dowson of Genisus Films. The song introduces the female voice of new Pakistani Singer Momina Mustehsan. where as an Indian Actress Isha Sharvani also stars in the music video of Pee Jaun.

The most interesting part about the music video is Underwater shots that are taken by Sumair Verma.

Some more screenshots from the music video: 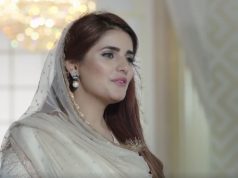