The famous Indian actor Naseeruddin Shah was recently in Pakistan for shooting his next film with Indo-Pak debutant directors Minoo Gauhar and Mazhar Zaidi. Minoo is an Indian Hindu and Mazhar is a Pakistani Muslim and both are married to each other.

They have explored this subject of cross-border marriages as well as inter-religious marriages in their new film about which they have not revealed much. The film is about illegal immigrants and in that Naseeruddin Shah plays a negative character.

This is Naseer’s second Pakistani film as previously he worked with Shoaib Mansoor in Khuda Ke Liye. Shoaib Mansoor wanted him to be a part of his film Bol too, but that could not happen for some reason.

Naseeruddin Shah has been a frequent visitor to Pakistan amongst his Indian film fraternity. Naseeruddin, talking about working yet again in a Pakistani film, said that:

“I was very moved by the script and Minoo and Mazhar’s sincerity.” 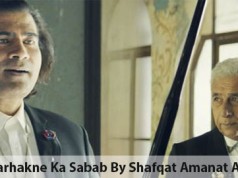