After the ennoble “Khuda Kay Liye”, critically acclaimed director-producer Shoaib Mansoor is all set to release his forthcoming flick entitled “Bol” that has the Pakistani heart-throb Atif Aslam in it as a lead actor.

And apart from Atif as musician and actor, the ones who have contributed in the music of Bol are: Sajjad Ali, Ahmed Jahanzeb, Shuja Haider, and Hadiqa Kiyani – these are, by no means, ordinary names. And it already adds up to the hype and the expectations of this immense-looking film.

“Hona Tha Pyaar” is from where we start off with; a song which was actually sung by Atif Aslam and Faiza Mujahid of “Bandeya” fame, but however, the filmmakers probably decided to use Hadiqa Kiyani instead of Faiza in the final (film) version. Nevertheless, the song comprises a charming melody and soothing vocals, especially of Atif.

After hearing a melodious track like “Hona Tha Pyaar”, we get to hear the magical voice of Sajjad Ali, which is nothing short of amazing.

“Din Pareshan Hai” is a song which was originally composed by the legend himself for his album Chahar Balish, but the film versions are actually better than the original. A delightful track, an exceptional melody, and vocals of Sajjad Ali – the perfect combo to set the mood upright.

“Dil Janiya” certainly has a catchy beat and impeccable vocals of Hadiqa Kiyani, but sadly, the rap part single-handedly ruins this composition and turns it into a bad one. Now, where in the world with a movie revolving around a serious-conceptual topic of Sunnis and Shias will tend to include a hip-hop number?

Sung by the commendable vocal abilities of Shabnam Majeed and Bina Jawad, “Sayyan Bolain” is a classical dance number, or more specifically a ‘mujra’ song that’ll feature Iman Ali in a tantalizing mood. The rhythm is pretty much easy on ears, but however this song resembles a lot about the “Main Vari Vari” track from the Bollywood movie “Mangal Pandey – The Rising”.

The pair of Atif Aslam and Hadiqa Kiyani comes back again; this time for “(Kaho) Aaj Bol Do” – a penultimate foot-tapping number, having a great tune, that actually seems like a title track. The drum beats sound catchy, and you can hear a much more raw-kinda Atif and Hadiqa in this track.

Even though Shoaib Mansoor’s first venture Khuda Kay Liye had a better soundtrack, with tracks like “Hamare Hain”, “Bandeya”, “Allah Hoo”, and the title track “Khuda Kay Liye” – Bol’s music is something that you can’t get away with; its music sounds promising enough. 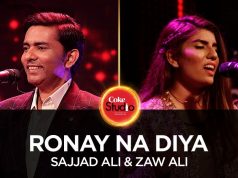