“Khak Nasheen” by “Chand Tara Orchestra” Band. This song has been nominated under the SONG OF THE YEAR category for LUX STYLE AWARS – 2017.

Song Description:
The track “Khak Nasheen” was released on December 14, 2016 by the “Chand Tara Orchestra – CTO” band and it has been nominated under “SONG OF THE YEAR” category of LUX STYLE AWARDS – 2017. 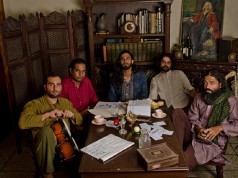