Laut Aao Na is a very interesting project where people from four different countries have combined their musical talents to produce something unique. The creator of the song is Haider Ali who took this challenge upon himself to collaborate with artists in Pakistan, India, USA and Iran to create a soul-touching melody.

A collaboration beyond borders!

Haider Ali chose music to express himself at a very young age, adopting the role of a vocalist and a keyboard player while performing in live concerts as part of an underground band.

As a self-taught musician, Haider became a versatile individual and adopted many different styles while working with some of the renowned names of Pakistan such as Abida Perveen, Rahat Fateh Ali Khan, Javaid Basheer, Ali Azmat, And Strings.

Although Ali’s input in the music industry has been ongoing for several years, his work as a keyboard player in Coke Studio Pakistan seasons 8 & 9 was highly appreciated. While expressing his skills on the keys, He was also contributing to the show as an audio engineer.

After his association with the music industry for almost a decade, Haider has now decided to revert to his initial passion i.e. creating music. 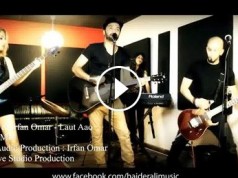