As any artist or a musician knows every year, month, day, or even hour, there are always changes that occur in the music industry. Finding a way to properly get you noticed is no exception. But he, at a very early age was able to make himself capable of doing something that was particularly made for him. Yes we’re talking about Awais Gulzar, a very well known artist of Pakistan.

Awais was born on 13 November 1990 in Multan. He belongs to a very reactionary yet a very caring family. Music is not only a source of recreation for him, it’s actually his passion. Therefore he started his music career during 2013 exactly on 14 February, while performing and winning in an open musical competition by singing a song of Sonu Nigam “Abhi mujh me kahin”. Later on, after one year he released his first song on 14 Feb ’2014. During this whole year he kept on working hard and performed with many artists including Falak shabbir, Bilal saeed, Mustafa zahid, Malkoo, Jawad Ahmad & Nadeem abbas.

Furthermore, he had to face many obstacles in his way to success. He had lost the support of his family, yet he decided to do everything on his own. He started working in different organizations only for the sake of music. After he released his first song, he was really appreciated by his teachers and fellow students that not only encouraged but motivated him to do much bigger and better. Exact, 7 months after the releasing of “door chalain” his page was verified by Facebook. Meanwhile he started singing songs of different Pakistani and Indian artists and did live streaming. However, he was appreciated a lot even by those artists including Falak shabbir, Umair Jaswal, Tony kakkar, Neha kakkar, Sonu kakkar, Javeria Saud Qasmi, Milland Gaba and many more.

In a very short period of time he is able to make him prominent among the Pakistan’s leading artists. Recently he got the chance to sing the poetry of the very famous legend and poet of Pakistan, Ahmad Faraz SB (late). He has done a lot of hard work for this song and has made it more beautiful with his pleasant and charming voice. The name of the song is “Tu Muhabbat” (Music: Shajar fakhar, composition: Asad Chohan, video direction: Nadir siddique).

The official posters of the songs are out that clearly shows us the remarkable efforts made by Awais and his team. He has decided to release the song very soon on his birthday (13 Nov) 2016. We anticipate that this time Awais is going to make us even more proud and hopefully everyone would enjoy this effort made by him. We wish him best of luck for his song and may the success be written in his fate forever (IA).

Check out the posters: 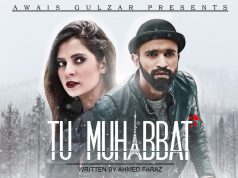