[Pakistan, Wednesday 3rd June’15]: Internationally acclaimed rock band Mizmaar took to the stage at Pearl Continental Hotel in Karachi at the PIFFA (Pakistan International Freight Forwarders Awards) on May 30th, nailing every aspect of their performance! The band, best known for their fusion music, is also one of the most sought after live acts of the country and known to set the stage on fire every time, with their energetic performances.

Mizmaar went on stage post dinner and the awards distribution ceremony, and made sure the audience was thoroughly entertained throughout their thirty minute live set. Kicking off their performance with a cover of Sun Raha Hai Na Tu (original by Ankit Tiwari from OST of Aashiqui 2), they then paid a tribute to the legendary Nusrat Fateh Ali Khan by singing his songs Allah Hoo and Tu Mera Dil. They also paid tribute to another South Asian legend, Abida Parveen, by performing her classic folk number Yaar Di Gharoli. They wrapped up their performance with their original song Pal from their album Sitara, but the high point of their performance was undoubtedly when the band performed their latest smash hit single Jee Loonga. Mashhad’s flawless vocals were supported perfectly by Kashan Admani on guitars and Alfred D’mello on drums, leaving the audience asking for more.

Speaking about their performance at the PIFFA, front man Kashan Admani said “We had a great time at PIFFA Awards 2015. It was a wonderful experience to perform for the freight forwarding and logistics industry”.

Mizmaar has been busy performing at various events across the country after the release of their comeback single Jee Loonga. They are currently working in the studio on an exciting project, which is slated to release post Eid-ul-Fitr.

Formed by guitarist Kashan Admani, fusion pop-rock band Mizmaar rose to fame in their native Pakistan with their debut album Kash, the release producing two hit singles for the songs ‘Kash’ and ‘Laut Ke Aa’ in 2003. Their second album, Sitara, was released worldwide on Universal Music in 2007, and spawned the hits ‘Hai Pyar Kya’ and ‘Sitara,’ the latter landing on a soundtrack to the Hollywood film ‘Dragon War.’

Despite their early success, the band was plagued by several personnel changes, prompting Kashan to focus more on his recording studio and commercial music production company, collaborating with longtime friend, band mate and drummer Alfred D’Mello. For several years to follow, the band was silent until Kashan and Alfred happened upon a young vocalist [name to be revealed soon!]: this phenomenally talented singer immediately had the two thinking seriously about reforming Mizmaar with a new front man and revitalizing their sound. The new vocalist brings a new strength to the band, combining classic eastern influences with a western pop attitude. There is currently a new album in the works. This widely anticipated comeback is due to be released soon, along with a video directed by Kashan featuring the newly recharged lineup. 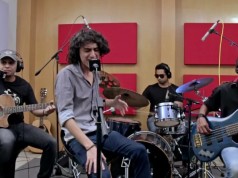