Music: Kazman Productions
DOP: Qasim Ali Mureed
Production Head: Ghulam Fareed
Song Directed by: Agha Ali
Network A-plus Entertainment
Schedule Every Thursday at 8:00pm
Starring
| Bushra Ansari as Khalida
| Sajal Ali as Zoya
| Agha Ali as Junaid
| Sana Askari as Sanam
| Qazi Wajid as Akhtar
| Imran Aslam as Adnan
| Parveen Akbar as Hina
| Asad Siddiqui as Moiz
Description:
Khuda Dekh Raha Hai highlights the important issue of manipulating lives of people in the garb of religion, and in this story, the life of someone as near as your own daughter.
Khalida, a pious yet narrow minded woman who has brought up her children according to her own religious boundaries and is known for offering Istikhara for people faces the biggest challenge when her daughter wishes to marry a singer.
Will Khalida’s personal intentions take over her piety and make her forget that God is always watching?
Directed By Sabiha Sumar
Written By Shahzad Javed, Afifa Muhammad 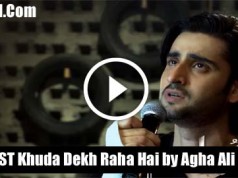