BIO:
Norwegian-Pakistani artist John Leo (Khakan Chaudhry) has returned to his true passion: music. His single ‘This Time Around’ released in 2013 established him as an act to watch out for. The single was aired on Radio Metro (Norway) and various radio stations in the UK, Italy and Pakistan. The song was also picked up in the UK and streamed daily throughout shops and theaters nationwide to millions.

Following the single, “Different ways EP” was released with two of the songs mastered by Tom Coyne (Adele, Maroon 5, PSY) which has resulted in a sound that will appeal to fans of pop/rock. The music video for the title track was produced by Videoink (Manchester, UK) and shot in York. The video has aired on ARY Muzik, Indus music, Oxygen Pakistan, Play TV and also SUB TV in the UK.

John had his Pakistani debut on one of the most popular shows in the country “The Drive Thru with Wes Malik” where he was introduced as the “next big thing”. Presented as “the Pakistani answer to Jay Sean” by Wes Malik, the EP has been in rotation for some time on CityFM89.
As one of the headliners at Scandinavia’s biggest “Mela” festival in Oslo, Norway, John performed live on August 18th 2013. Currently he is busy working on new material in studio, after releasing the single “Shine” soon after “Mela”.

After much demand, John will soon release his first urdu track worldwide, currently under production.
‘Different Ways’ is the leading song and video from the EP, available on iTunes and all major digital outlets worldwide.

Watch it on Dailymotion: 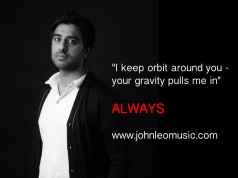