Artist Biography:
Mujeeb Mustafa Rizvi is an amazingly talented musician gifted with a golden voice supported by the funky strums of a guitar.
Since his early childhood he was inclined towards music hence proving the school of the thought “Artists are born special” . As he grew older his interests in music continued to grow along with a passion to become one of the best Music Icons of the Industry.
He along with his brother (Haseeb Rizvi) are “Gandha bandh” shagird of the Prince of Patiyala gharana “Ustad Asad Amanat Ali Khan”. He started his training as an eastern classical vocalist at a tender age of 13.
He shifted to Lahore in order to complete his BBA in Finance, from Lahore School Of Economics in 2006. Later he joined the Masters Program in his own University and graduated as a MBA majors in marketing in 2012.
During his study years his passion for music never came to a halt but in fact kept increasing for which he practiced hard, and composed his own songs. He played in a Band (Moen jo Daro) in the underground circuit. The band Managed to be one the hottest and sort after bands to perform in the underground circuit.
The band was strictly inclined towards Metal and alternative rock music, and Mujeeb didn’t want to limit himself, he always thought he had in him more as an artist to be discovered, thus he decided to take part in a Vocal competition to test himself as an artist “WITHOUT” the band. The Competition (LUMS OLYMPIAD 2009) was held on a national level and had contestants coming from all over Pakistan, it had many established names in the list (e.g Omer Nadeem , Ozair Jaswal etc.) all competing for one prize. Mujeeb Went on to win the competition with a never heard before cover version of Sajjad Ali’s Hit single “Babiya“.
After Mujeeb, a wave of bands and solo underground artists covered Mujeeb’s Version of Babiya.
After winning the competition his confidence level got a boost with an increasing popularity among the peer and people of his age group,his increasing individual fame eventually created problems with band’s image and the band decided to part ways with Mujeeb.
Mujeeb continued on his journey of making music as a Solo entity and created his own album, by composing songs which are classified into different genres. He believes he has alot to offer to this industry and his country, his dream is to represent his country on a global level as Music icon. 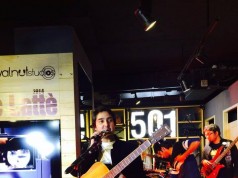