“I have not sung Bhula dena for Aashiqui 2, I have sung it for friendship” quipped Pakistani Singer and now Bollywood playback singer Mustafa Zahid at a recent press meet.

Pakistani Rockstar Mustafa Zahid is riding high on Bollywood success these days. While his latest hit ‘hum Jee lengay‘ from Murder 3 is still in the charts, a new smashing hit from Aashiqui 2 ‘Bhula dena‘ is becoming rage on Internet already.

The combo of Mustafa Zahid and director Mohit Suri created magic in Awarapan and now the duo are back with Aashiqui 2, so one has to believe in the breathtaking music. Even though Mustafa has only dubbed one song of the album but still the song itself is a rage all over Internet within a week of its release.

Talking to press on a show in Birmingham, Zahid stated that the song is a true story of his dear friend Mohit Suri, who when offered him the song told him how it is related to his late father.’ I had promised Mohit that people will walk out of cinema with tears in their eyes since its the climax song of the film ‘.

He further added that the song hold a place in his heart which no other song do. ‘ I was dubbing it for a friend already and while I was dubbing I got the shocking news of our managers mother passing away, I was shattered I was in sheer dismay  and rest just happened’.

Mustafa Zahid concluded talking to press pointing towards heavens saying ‘this ones for you uncle and aunty’. Aashiqui 2 is a sequel with a new story and it is scheduled to release on 26th April. 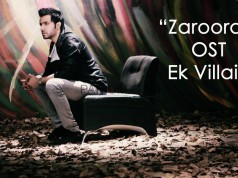