Despite of the consistent efforts for truce made by Pakistani government with both Indian government and Indian Showbiz industry. Pakistani singers and actors are still out of Indian boundaries. Artists like Rahat Fateh Ali Khan are unable to record their songs in Indian studios. The composers who wish to record their numbers with the living legend have to call him all the way to Dubai to record their tracks.

The recent efforts in the struggle came from famous producer Vashu Bhagnani, who tried almost every trick which could be found in the book of exertions to get Rahat to India for the recording of song “Dil ko aaya sukoon” for Priyadarshan’s Rangrezz. But couldn’t succeed in the effort, which resulted in the composition of song in Dubai. A news source added that it’s become an accepted practice for indian composers to record with Rahat in Dubai. They said, “And why only Rahat saab, several other Pakistani artistes also record Bollywood songs in absentia.”

Recently another veteran musician who faced the same problem was Shafqat Amanat Ali Khan, who was when approached by director Luv Ranjan for a love song for the movie for Aakash Vani, had to record it on Skype. Similarly Atif Aslam’s “Bol Ke Lab Azaad Hain Tere” for the film The Reluctant Fundamentalist was recorded via internet. 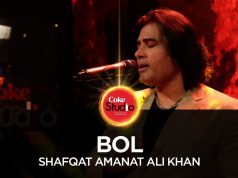