Humaima Malik has already proved herself as one the youngest best actress of Pakistan who has beaten famous international big wigs of Bollywood such as Shilpa Shetty, Frieda Pinto and Shabana Azmi at London Asian film festival award. She has continued to maintain her decorum as young talented actress by winning ‘Best actress at 11th Lux Style Awards 2012’ unanimously.

No other actress could compete the standards that she has set through her amazing acting skills in Shoaib Mansoor’s ‘Bol’. She has made her point very clear that your talent could also recognize internationally, if you work at a good project and show brilliant talent. She is not only an actress with pretty face but also won hearts through her mind blowing acting.  Bold yet talented, charming and beautiful, Humaima has made Pakistan proud again at national as well as at international level. 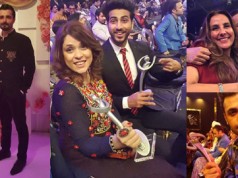