Coke Studio has released this week the very first episode promo of season 4 featuring Akhtar Channal Zehri, Komal Rizvi, Sanam Marvi, Mizraab, JAL the band and Bilal Khan. The episode is set to go on-air on 22nd May 2011 and the expectations have also reached to the top and the fans are now just waiting to experience what we have in Coke Studio Season4 this time.

After seeing the promo of each artist’s performance, we are seeing one performance and song specifically which can take the nation by storm. Yes, the folk song Dannah pa Dannah which is already a hit track in Pakistan is all set to go VIRAL again, with the revamped touch of Coke Studio this time.

Akhtar Channal Zahri, who has this great folk song under his belt, praises in the song the greatness of his land Balochistan. The song was released long back then a decade, but got nation wide acclaim after Shazia Khushk – a famous Sindhi folk singer – sung it very well. Now, as Zahri Sahab has been taken board in Coke Studio, there are many chances that this already hit track will go WILD/VIRAL in the upcoming days – as the whole nation will be experiencing this on their TV channels and radios back to back.

Komal Rizvi, who is featuring with Zahri this time, looks very promising and strong with her vocals as she beautifully sung a chorus part of Dama Dam Mast Qalandar ( a famous Sufi rendition most popularly known as LAL Meri PAT and sung earlier by musicians like Nusrat Fateh Ali Khan, Abida Parveen, Junoon and various others.)

The track Dannah Pah Dannah will actually be similar idea as revamping and fusing ‘Dum Gutkoon’ with ‘Jugni Jee’. After the huge success of Arif Lohar and Meesha Shafi’s rendition in last season, its not much difficult to predict that this collaboration – Akhtar Channal Zahri and Komal Rizvi – gonna rock the floor again in first episode of Coke Studio Season 4.

But that’s not all what the first episode would have, it gives a complete package as it has some great performances by Mizraab, Jal , Bilal Khan and Sanam Marvi – who have their own fan base and following.

But what I am talking about is, ‘Dannah Pah Danna’ is something that is NOT for a specific niche, its just Universal !  and therefore I believe it is gonna VIRAL in the upcoming weeks (I can actually see the whole nation humming this amazing track )

Let’s check out again , what the buzz is all about: 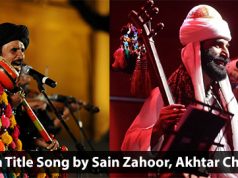