The band Sketches who has produced several music videos on social, spiritual and folk tales, is coming back again on screen with their new yet uniqueÂ theme. This time the band is asking everyone to take part in their upcoming Music Video by using their right of “Freedom of Expression”. You can express your views or thoughts and get appeared in the upcoming video of The Sketches called “Kaanton Ke Deewarain”. All you have to do is:

> express your views or thoughts on a banner/sheet,

> take a picture or video of it while holding the banner; and

If your message is worthy and can influence the masses, you along with your message will be appeared in the music video. The band hasÂ already received an amazing response from their fan following. Submissions are also received from different countries of the world, so where ever you are, doesn’t matter. If you believe you have the right to express, Do Express Now.

Note: Some of the musicians that are also featuring in the said Music Video are: Farhad Humayun(Overload), Nouman Javaid, Amanat Ali, Nausher(Inteha), Bunita, Faisal Khan(Roxen), Kenny(drummer) and SIR RM NAEEM(Artist).

Check out some more submitted pictures: 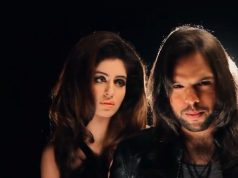