Women in the Pakistani Rock Scene

A month ago while I was looking out for new Pakistani bands and artists I managed to stumble upon a song called Moray Saiyan from a female Punjabi singer known as Abeer Hashmi. It was a rock song and as I listened to it a few times I realised it was one of the very few rock songs I had heard from female Pakistani artists. The last one I had heard was Uljhan from Maha which was more of a tribute to evanescence. The track ‘I try’ sung by Arooj Aftab was also one of the better rock tracks I had heard from a female artist. In all there were only 6 female artists I knew about who had any interest in rock music…

In any case being passionate about rock music and of course about everything Pakistani I wasn’t able to bear not having the tracks and videos launched by Abeer. So I went on an all out search for Abeer Hashmi’s songs and videos. In my search I uncovered 2 more music videos from the same artist. One was Boliyan a good groovy dance track but since I was particularly expecting her to be solely concerned with rock music I was disappointed. Lagdi Na Ankh was also a catchy track though the video was senseless to say the least and if it wasn’t for a woman then no one would even bother to look at it for a minute let alone the full length of 4 minutes and 14 painful seconds.

Although I was disappointed in my search for female artists with affinity to rock music, on the positive side I did find out that Abeer is a very versatile and bold artist and as a result developed a liking for her music.

However this little search for me turned out to be the starting point of a larger more major search for such artists.

Is Rock Music a rising trend amongst the female artists?

Although many female artists have tried to position themselves as rock artists when they first introduced themselves they have ended up being much closer to the Pop Scene rather than to the Rock Scene. This was the case with Schaz’s debut album Jalan which was once much awaited as a rock album but turned out to have little to do with Rock music. Fariha Pervaiz also tried to position herself as a rock artist at certain times but failed. Instead she just switched to genres that were generally more welcomed by Pakistani Society. As a result there is no female artist in the Pakistani mainstream solely concerned with Rock music. The closest would be Arooj Aftab who is currently based in Boston but even she isn’t solely concerned with Rock.

It is quite evident however that outside Pakistan there are a number of Pakistani women who are practicing Rock music. “I feel in Pakistan there simply isn’t enough demand for Rock music. We have Aaroh, EP and Call. These bands got attention but not as much as they should. No one really listens to them except a section of the younger population. Most just listen to foreign music” says Amna Hayat who is part of a Norwegian-Pakistani Heavy Metal band known as Rooh.

In Toronto, Sana, a 21 year old is the lead guitarist of the English band “Retribution”. She is the only Pakistani in the band and the only woman. She believes that she has more opportunity in Canada “The thing is in Canada I have more opportunities as a woman than I would in Pakistan. Especially if as a woman you want to do something that’s morally unacceptable in society.” Sana says “I wouldn’t really think of trying to go for a Rock band back in Pakistan but I would like to start a Pakistani band here with other Pakistani students at my college.”

But the supporting vocalist for the Nationalist band Soch who identifies herself as Rasha tells a different story “The society may see it negatively but so what? Frankly we don’t care. We’re here to leave a legacy and we have as much opportunity in Pakistan as we do here. The only thing is we have to start standing up for what we believe in and Pakistanis need to support their own artists. Not just use Indian or English music as an excuse to ignore them. Listen to other music as well. But don’t ignore your artists saying they all play bad music and don’t try to discourage them.”

Many people in Pakistan feel the same way. It’s the 21st century and bands like EP, Aaroh, Mizraab, Call, Akash, Roxen and many others still in the underground scene have given Rock lovers a great treat. The younger generation believes if some women love Rock Music they should simply follow where their hearts lie and give a new voice to the Nation.

Regardless if they are Rock artists or not it is still something to be admired that these girls have the courage to go against the norms of society and decide their own path in life. It isn’t easy to start a band or be a part of the music industry considering the way society in Pakistan perceives it. For most girls in Pakistani Society it’s an almost unthinkable feat to start a band or start a career in singing.

However some of these girls still turn towards the music industry despite limited media for the promotion of upcoming Pakistani musicians and the negatively affect Bollywood has on the Pakistani Music Industry.

Many people in Pakistan see this as a positive change and hope to see more Rock Music from female artists. 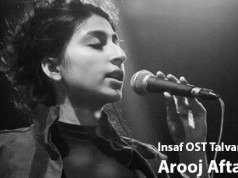